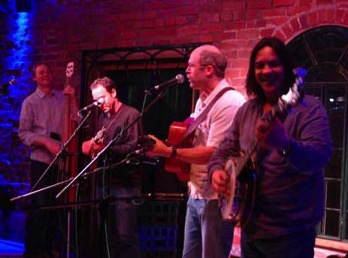 The four members of (more) Growling Old Men will be very familiar to British bluegrass fans. The half-English, half-American quartet has toured twice in the UK and all four have taught at Sore Fingers at least once. Featuring Leon Hunt on banjo, Dom Harrison on bass, Ben Winship on mandolin and John Lowell on guitar, the band has now taken its act one step further and produced an album, Shuttle Diplomacy.

The history of the band stretches back quite some time. Leon and Dom have been working together for years as members of Daily Planet, and Ben and John have played together in various groups including Kane’s River and, of course, Growling Old Men. The collaboration between the two halves has been in the works since the late 1990s when Ben and Leon first met.

“We first met when Leon was playing with the Planet,” Ben says. “Matt Flinner helped them get some gigs in States and we had a few summers when we played the same festivals. They also played a small gig in my home town. Subsequently, Leon toured for a while with me and Matt in the Judith Edelman Band and another time he and Jamie Matthews came over to play some gigs with me and Matt. So Leon and I have a long history and we’ve also stayed in touch about recording stuff because we both have our own studios.”

Despite knowing each other for years, they still needed a catalyst to get them playing as a group. How did the four of them come together as a band?

“We didn’t really mean for it to happen. It was mostly accidental,” jokes John. “No, actually we started playing together largely because of John Wirtz and because we knew Leon already. I had taught at Sore Fingers in 2004 and when Ben and I came out with our Occupational Hazards CD, I sent a copy to John just because I thought he might like it. As it turns out, he has no taste and he liked it a lot and wanted to hire us for Didmarton Bluegrass Festival. He suggested that we get together with Leon and Dom to put together a few more gigs, and there you have it.”

The band played at the 2006 Didmarton festival and toured briefly around the same time. They toured again in the spring of 2007 when Ben and John were teaching at Sore Fingers. “After our second tour we decided we enjoyed doing it enough to commit to recording an album,” says Leon.

The most remarkable thing about the new CD is that the band was never in the same studio when recording it. In fact, they were never even on the same continent. The decisions about tracks, the arrangements and the recording were all carried out across the Atlantic.

“Some of the stuff was arranged the last time we all played together,” says Ben. “On the rest of the stuff, whoever sang the song or brought it to the band usually had the vision of how it would be played. There was some emailing back and forth and rearranging, but it went surprisingly smooth.”

“It was a bit like a game of tag,” Leon tells us. “Ben and John did a load of recording, sent it to us and we did a load more recording and sent it back. I think some of the sessions went back and forth between the UK and the US four or five times.”

This long-distance production explains the album’s title, Shuttle Diplomacy. Ben tells us, “Shuttle diplomacy is a means of conducting foreign policy via airplane (I think the term was coined when Henry Kissinger was trying to broker a peace deal with the Arabs and Israelis). Seeing how we rely on airplanes to make this collaboration work, it seemed like a fitting title.”

He continues, “It was originally going to be called Bangers and Grits, but all the potential cover images seemed really gross.”

The album is a collection of eleven songs and tunes, most of which come from the back-catalogues of the various members. From the Growling Old Men side are Georgia Buck, Crooked Jack, Rye Whiskey and Somewhere Down the Road.

“We put songs on there that we had been playing live, which of course were songs that had already been recorded,” explains John. “That’s why there are a lot of remakes of previous Growling Old Men tunes. Hopefully they are better, or at the very least…different.”

Leon and Dom brought a few Daily Planet tunes into the mix.

“Dom and I originated the instrumentals over here,” says Leon. “We’ve never recorded Off to California and Cherokee Shuffle before but have played them a lot live. Bodum was recorded as a Daily Planet tune eons ago but somehow found its way into our collective repertoire on the tours.”

Ben has a much simpler explanation for his choice of tracks – “because they were easy…” he says.

The album also features many special guests from both sides of the pond. Fellow Daily Planet members Tim Robinson and Jamie Matthews make an appearance, as well as fiddler Brian Wicklund from one of Ben’s other bands, Brother Mule.

All together they help make this album an extremely enjoyable listen and make it hard to believe that the recording was put together on opposite sides of the globe.

The band will be back together and touring the UK later this summer, including another appearance at Didmarton, and plans are afoot to take the group further afield. “We’re hoping to do some stuff in the US and Canada next summer,” Leon tells us. “There are already a few things in place so that’ll hopefully come together.”