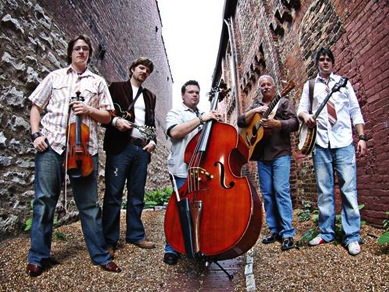 A nostalgic look back at Cadillac Sky, who we interviewed ten years ago before their headline set at Didmarton Bluegrass Festival.

Texas-based Cadillac Sky burst onto the bluegrass scene in the late 2000s. Releasing three albums between 2007 and 2010, the band were defined by a progressive country-rock sound coupled with unapologetically religious lyrics about sin, suffering and redemption.

But perhaps their strongest characteristic was an uncanny ability to both delight and antagonise audiences at the same time. The band managed to take the age-old “is it bluegrass?” argument to extremes. Their instrument line-up was correct for the genre, there were clear first-generation bluegrass influences, but their loud, aggressive style was too much for some. Their ability to create controversy simply by playing their songs came to a head at a Arkansas bluegrass festival in 2007, when the band were paid off and asked to leave before they had fulfilled their contracted number of performances.

The group made a huge impact on the UK scene when they headlined at the 2008 Didmarton Bluegrass Festival, where they were just as polarising as they had been back home. The soundcheck alone was enough to drive many attendees to leave the marquee, with the monitor volume exceeding what many acoustic bands would produce during an actual performance. More walked out once the music started. But those who stayed absolutely revelled in a vibrant and exciting show that showcased exceptional musicianship and stagecraft.

Given the band’s uncompromising, near-arrogant approach, it was not all that surprising when they broke apart. Frontman Bryan Simpson left in 2010, and despite attempting to continue with a new lead singer, the band eventually went on indefinite hiatus in 2011.

Where are they now?

Singer and mandolinist Bryan Simpson left the band in 2010 to devote his life to his Christian faith. He has however since returned to music, most notably with the experimental The Whistles and The Bells.

In addition to being part of Chessboxer, Ross has become a regular contributor to Mumford and Sons, both in live shows and on recordings. He has also toured with Bruce Hornsby and the Noisemakers and the Nitty Gritty Dirt Band.

Guitarist Mike Jump left Cadillac Sky in late 2008, not long after their appearance at Didmarton Bluegrass Festival. Not much can be found about what he or bassist Andy Moritz have been up to recently.